Between the Light and Dark 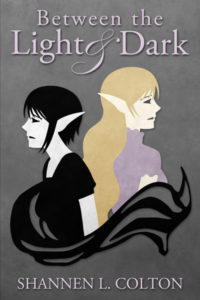 One would think a damsel in distress would be in less distress after she’s rescued. But that all depends on who rescues her.

Elysia, princess of the light elves, is only allowed outside after nightfall once a year, and for good reason; dark forces rule the night, and this year, a grim surprise awaits her after the Harvest Sunset.

A foul host of goblins snatches Elysia from her escort and drags her away, blighting her with an ailment that will take her life within a week. When a mysterious elf comes to her rescue, promising an antidote, Elysia has no choice but to put her hope in him—even after he reveals that this antidote comes in the hands of creatures far worse than goblins, creatures the princess fears above all others: the dark elves.

Swept up in her rescuer’s schemes, Elysia is plunged into the heart of dark elven territory, where she learns a horrifying secret about her kingdom’s adversaries.